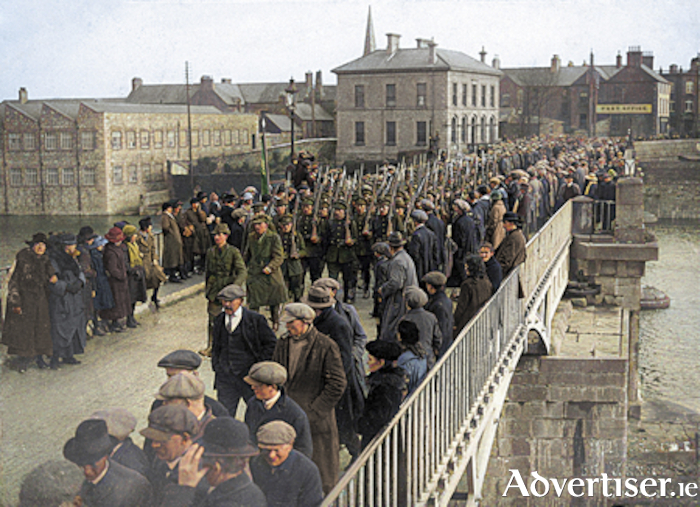 A historian and a technologist walked into a bar … Actually, they didn’t. In fact, the two only met face to face last week after spending the last year being estranged from each other but firmly at the center of the Irish edition’s biggest success.

The Ireland In Color book adorned more than 50,000 coffee tables last Christmas, a gesture that stunned publishers but was a welcome boon to booksellers across the country and beyond.

The brains behind this idea, colleagues at NUI Galway, historian Sarah Anne Buckley and technologist Professor John Breslin, normally occupy different areas of interest. Dr Buckley is the latest in a series of innovative historians who have brought history to life through modern documentary techniques; and Professor Breslin, who has been at the forefront of innovation, computer science and electronic engineering for most of his life.

I am often taken by the wonder of a strange juxtaposition. A poet with a leader; an astronaut with a farmer; and here, a product that is the combination of looking back and looking to the future.

This week I chatted with John and Sarah-Anne as they took the virtual route to promote Ireland In Color 2 and found them remarkably relaxed despite their huge success.

“It’s fair to say that while we thought there would be some interest in an Old Ireland in Color book when we first discussed the idea at the end of March 2020, the level of real interest at its release in October 2020 was quite unexpected, ”said Dr Buckley.

“Making headlines on CNN and appearing on the Late Late Show was really something we couldn’t have imagined, let alone the 80 to 90,000 copies produced since release, of which 50,000 sold in just 10 weeks,” , said Professor Breslin.

Did success tempt them to go beyond Irish shores for the series?

“We could leave that to others. There have been calls for books from nearby neighboring countries, as well as one on the diaspora, but it is interesting that there are already books for other countries in parallel (John bought two or three recent books of French photographs colorized a few weeks ago: one is called simply “They lived in color”). On top of that, our expertise and interest is in Ireland and Irish history, ”said Sarah Anne.

“There are still many amazing Irish photographs that have yet to be colorized, let alone those of individual towns and counties, with many superb collections in our local libraries, archives and museums.

“Our local readers will be happy to hear that we have a dozen colorized photographs of Galway and Mayo in book two, including our cover photo of Loughrea in 1954,” she added.

As a historian, does Dr. Buckley feel that this has brought people back to a greater appreciation of the past?

“Completely. There were fantastic messages of support, but also people asking how to access documents about their region, genealogical research and broader social and political history.

“We love it when people come down from rabbit holes, and we’ve tried to highlight the amazing online and freely available sources like the Dictionary of Irish Biography, as well as highlight our fantastic local and national archives (and archivists ).

Love for the past

“We have such a love for the past, but some people feel disconnected from it, so we think the book and the project have helped encourage more interest and research – not just on well-known characters, but also on the many fantastic “ordinary” people who lived in the 19th and 20th centuries. “

I ask if the addition of color leads to increased empathy with our ancestors. Were they a significant other when in black and white?

“Readers told us that it increased their empathy, made the picture and story more understandable, and we know that’s what it feels like when we see the results of colorization and when we get to look for individual elements of a photograph and discuss the context.

“It’s not that they were a significant other, but we don’t relate as easily or so deeply. It helps create connection and interest, and they are beautiful to watch,” she added. .

But does coloring change the story? Or do they think people lived their lives in color and it was the original monochrome image that changed that more than modern coloring?

“Colorization is nothing new: indeed, from one of the first photographic techniques invented in the 1840s, the daguerreotype, photographs have been colorized. People lived their lives in color, and while there is a fair amount of subjective interpretation involved, we do our best to make as informed decisions as possible when choosing colors, ”says John Breslin.

“Our colorizations have improved over time, using a combination of knowledge we had already gained from our previous work on the first book, as well as published resources on dyes, textiles and clothing styles in Ireland that we have referenced.

“Our use of tools like Photoshop and DeOldify (an artificial intelligence system) has also become more advanced, resulting in what we believe to be a collection of vibrant and compelling colorful photographs on a wide range of topics of interest to. new and old readers. “

Do they think we’ll ever have a fascination with seeing modern colorized images in monochrome; in the same way that we are fascinated by colorized images? Monochrome images are so rare now in newsprint and online.

“We’re not sure – we think that for us the main thing has always been to build interest? The photograph remains in its original form after we color it; we use it to increase empathy and interest in the past – monochrome could have a different purpose (and of course also beautiful to look at), ”said Sarah Anne.

“There are many instances where modern monochrome photographs have more impact, for example in architectural shots, or where they can be used as a contrast to color to highlight something, such as in the mantle scene. red from Schindler’s List.

“Because our brains are a bit used to seeing monochrome in combination with older or historical images, taking a modern image and removing the color can sometimes make you think at first glance that you are looking at an old scene, which in the opposite direction (towards the colorization of old photos) can show that some things do not seem to change despite the passage of time: children’s faces, a smile, poverty, the beauty of nature, etc.

They worked with many renowned collections to make this series. Are they receiving images sent by members of the public?

“We often have photographs sent to us by members of the public,” they said. “Although due to time constraints, we can only provide guidance on where they can color them themselves. However, in the other direction, we looked for interesting photos from individuals as well as from collections: the photograph of the “Grosse Neige” of 1947 was provided to us by the son of a chemist who took it at the door of his shop on Main Street. at Belturbet.

“We have included in this book some of the most recent popular photographs from our social media channels, and approximately 60% of the photographs in ‘Old Ireland in Color 2’ have been newly colorized and not previously shared, with a some of these largely invisible since they come from private collections.The book features photographs of the 32 counties, ranging from 1843 to 1964, and even includes a photo of a rebel from 1798 born in 1780.

Surely an exhibition is in sight? They said they were working on two at the moment: one in Galway and one in Cork.

“These will not be permanent exhibitions, but we hope they will be of great interest to the public.”

Is the sky the limit with this series. Can we see it going like now, this is what I call Colorized Ireland # 56?

“While the idea for a second book had filtered in the background and we had put together some ideas from photographs that could potentially be used for it, it was really the love for the first book from those who did. had bought or given to friends and family who decided us to go on and make a second one.

“The reaction to the first book was very moving, from parents or grandparents who shared stories about their childhood with their children and grandchildren, to others at home or in the hospital who used it. to help manage various memory problems in the elderly. .

“We have no plans for books beyond ‘Old Ireland in Color 2”, although a “Now” or “Hits” series (showing age here) would be fun, “said Dr Buckley.

“Nonetheless, we hope the audience will appreciate the effort put into the second book: both the attention to detail in coloring the photographs and the extensive captions that focus on the history of the photograph as well as a broader historical context, ”she added. .

Ireland In Color 2 is now available at your local bookstores.