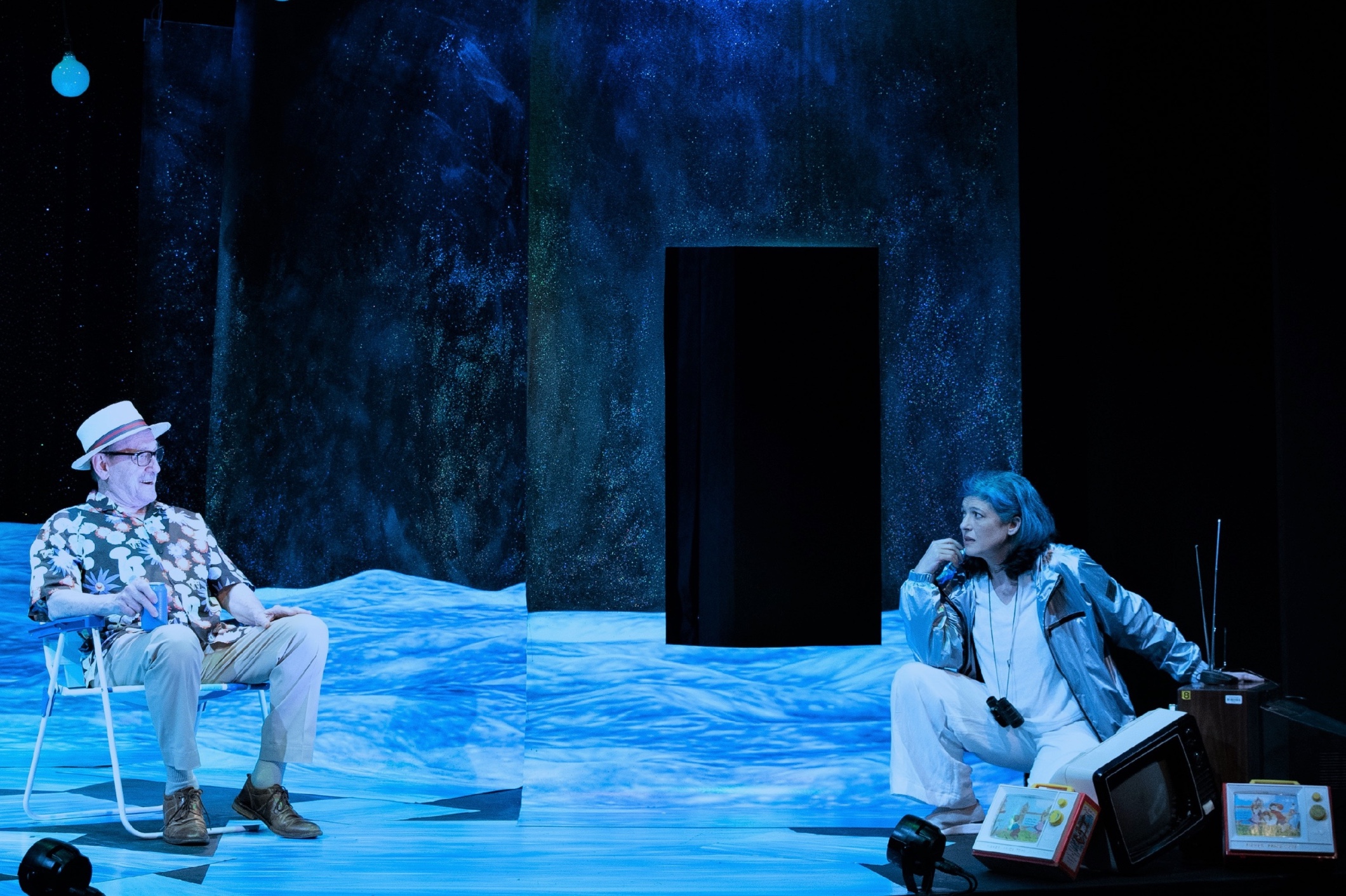 THEATER REVIEW: “To the Moon and Back” brings a strong sense of impossible reality to the Chester Theater Company until August 21

To the moon and back
Chester Theater Company in Chester
Written by Darcy Parker Bruce, directed by Keira Naughton

“I love you to the moon and back is said between parents and children, love partners, friends and even to pets,” reads a usage definition in the online slang dictionary. The full phrase has become the title of books, films, and even a choral work by John Adams where children sang it in response to the horrors of 9/11. Dolly Parton quoted her in one of her love songs. I remember Jackie Gleason’s character Ralph Cramden saying it as a threat to his wife Alice, played by Audrey Meadows in which love played no part. Now, in a world premiere play of Darcy Parker Bruceordered for Chester Theater Companyit takes on a very special resonance when a young woman, living on the moon near her father who also lives there, confronts childhood trauma and the dangers of parental love.

Reality for Ace, played with great energy by Tara Franklin, is always in his sights, but not necessarily in his vision. Ace lives in a blue world, the surface of the moon where she is free to wander around to admire the view of earth in the distance. She is outspoken, friendly to strangers, and pleasant, if hostile, with Major pleading with her to call him “Father”, which she will not. She dresses only in virginal white with a touch of moonlight silver. Her hair is beautifully styled and her makeup is flawless. She is an ideal, a young woman that other young women would look up to as a role model. But despite all her apparent perfection, she is afraid. Although she hides it well, her friend RJ sees it. Their special friendship, cemented by fast food burgers, boosts his confidence.

RJ is beautifully played by Pauli Petrelli, who has performed on this stage three times already and has always left his mark. They are stronger than ever in this imaginative role, someone who can show compassion for a woman in psychological difficulty without getting involved in the details of her disorder.

Ace, in her own imaginative way, brought RJ to her personal moon to provide her with a devotee, someone she can safely love “to the moon and back”. RJ is the opposite of Major in every possible way. RJ is unofficially formal, undemanding and supportive, all presented with sweetness in Petrelli’s performance.

Even so, it is Major who obsesses Ace. He is there for his most difficult moments, his challenges. He is lounging on his beach

chair, his Hawaiian shirt a symbol of his informal side and his casual attitude towards life. Raye Birk takes on the role of Major (call me Father) and he witnesses her tribulations as she moves to survey this lonely environment they share. Birk is great. He exudes a warmth that is never reciprocated and he never reacts negatively to her tough attitude. When she opens the door to their world, he takes a genuine interest in what she finds there. And when he confesses his indiscreet abuse, it is sadly moving.

Setting a story like this in a fantasy world, such a special environment, is up to the designers of the show. The stunning set was designed by Travis George, the imaginative costumes by Charles Schoonmaker, and “Earthlight” lighting design by Lara Dubin. Nathan Leigh’s sound design and evocative music keep the show in its fantasy reality. Keira Naughton directed this new play with a strong sense of impossible reality, making for an interesting, real, and moving drama that avoids any potential melodrama. She gave us good theater here.

“To the Moon and Back” plays at the Chester Town Hall Theater until August 21. For more information and tickets, call 413-354-7771 or visit Company Website.