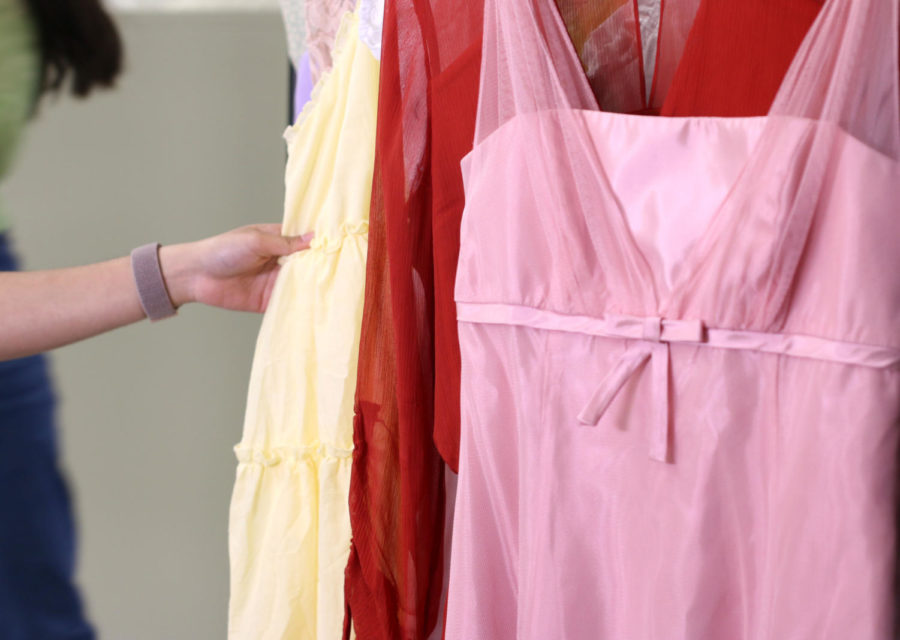 students share the story behind their prom outfits – The Hawk Eye

Although prom is always viewed with much anticipation, April 23 this year marks a particularly special date as the school’s first conventional in-person prom since 2019. Attire is often at the forefront of prom preparations. student ball. Three seniors share the story of their outfits for what will be their first and last “real” prom:

Senior Mariam Ali does not hesitate to stand out. For her prom outfit, Ali wears a Pakistani outfit, as she did for all the high school dances.

“[My outfit] is white and gold, and the pants I wear with [are] tight and then loosened below the knees,” Ali said. “The style is called a gharara. It’s very bling-bling: there [are] lots of jewelry on it and the sleeves are neat with gold embroidery.”

At one point Ali tried to fit in, wearing a more conventional dress for her eighth grade formal. The freshman homecoming was the first dance where Ali wore Pakistani clothes, and she enjoyed the outfit and the compliments she received.

“[For] homecoming, i didn’t know what to wear, and i know the homecoming dresses are more [traditionally] short,” Ali said. “Being a Muslim, I don’t show much skin. So I [thought,] “I can wear one of my dresses: it’s fluid, and I can be covered and bring more diversity to the group.”

While her Pakistani outfits bring her closer to her culture, Ali is also passionate about hair and makeup.

“Hair and makeup are definitely what I’m connected to,” Ali said. “I’m going to do my makeup, [and] I usually do more eye makeup. I love dressing up.”

Senior B. Haynes’ sartorial inspiration came from an unexpected source: a lifelong love of anime.

“My prom date and I share this love for this anime called ‘My Hero Academia,'” Haynes said. “I had kind of mentioned that I wanted to correspond with her, and the second she showed me her dress, which is red, I immediately thought of that blue cardigan I had on, and that blew me away. recalled the same outfit as a character [wore] in the anime movie.

Haynes’ outfit is inspired by the character of Katsuki Bakugo.

“I started putting two and two together and I was like I was wearing a long sleeved red button down with a vest over it, it would match the energy of the character,” Haynes said. “That’s where the whole idea came from.”

Haynes said “My Hero Academia” had sentimental value to him because he saw his struggle reflected in [the] the characters struggle with anxiety, and he sees his outfit as representative of him claiming his anxiety.

“I started watching anime [during] freshman year, so it’s like this beautiful transition,” Haynes said. “I was very anxious at my old school, and seeing the protagonist deal with their own form of anxiety and rise above it and become more than anyone thought was very sentimental and inspiring to me. I modeled this as best I could during my senior year.

When shopping for a prom dress, a high price tag and hours spent searching for it seem inevitable. Senior Unaiza Khakoo, however, found her dress at a thrift store within an hour.

“I think I’ve always wanted a vintage dress,” Khakoo said. “I was going to save my dress no matter what. I can’t remember a time when I wasn’t thrifty. I have an older sister and my mom loves thrift stores, so it became a bonding activity for us. It was always a fun family activity that we did together.

Khakoo saved all her dresses for high school dances and said fashion became more important because she had more freedom in how she was allowed to dress.

“I find a lot of joy in saving my clothes just because it feels like a creative process,” Khakoo said. “You go through all these clothes and try to find what looks best on you and maybe you choose something that’s not necessarily conventional – it added to my experience with fashion.”

Khakoo plans to incorporate pearls into her jewelry and hair, and she said the princess vibe will go a bit with the “Enchanted Forest” theme. Most of his anticipation, however, comes with the Perot location.

“I have no expectation for [prom] because I just want to enjoy it as it is and have fun with my friends,” Khakoo said. “I want to take fun pictures with the gems and the dinosaurs. I love the Perot – used to go there all the time when I was younger so it’s nice to have a full loop moment for something you did when you were younger and go to primary school. It’s like an important moment in our life. »

35 stunning summer dresses to buy before the sunny days