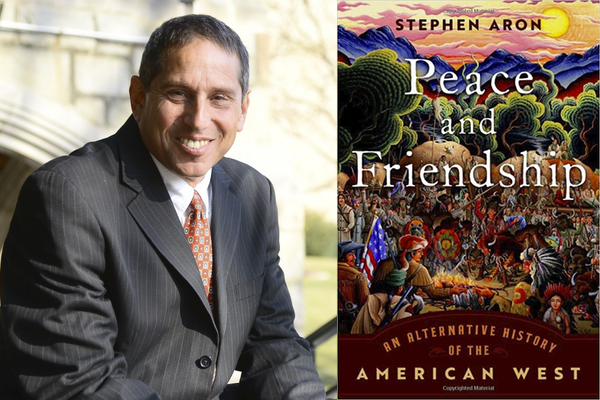 Few museum directors find the time to write books and even fewer to write history books – yet Stephen Aron, president and CEO of the Autry Museum of the American West in Los Angeles, has managed this feat with a provocative new story from the American frontier.

Founded in 1987 by Jackie and Gene Autry, the museum merged with the historic Southwest Museum in 2003 and its collection now contains over 600,000 objects, including one of the largest collections of Native American artifacts in the United States. .

Prior to taking the post at Autry, Aron was a professor of history at UCLA. His official affiliation with Autry began in 2002, when UCLA allowed him to share his position and become executive director of the new Autry Institute for the Study of the American West. In July 2021, he was named President and CEO.

Aron is the author or co-author of four previous books including The American West: A Very Brief Introduction (Oxford). His latest book, Peace and Friendship: An Alternate History of the American West (Oxford) examines episodes of peaceful accommodation, often overlooked in the mainstream historical narrative of conquest and violence.

James Thornton Harris spoke with Aron about his new book and his role as CEO of Autry.

Q. In your book, you often use the term “wishstory”. What do you mean?

I define it as the story we wish for, often rather than what actually happened. Wish stories play on our desire for an enjoyable version of American history and are a big part of our popular culture. Take, for example, the 1995 film Pocahontas made by Disney.

The film invents a fairy tale romance between John Smith and the young princess. They marry and, as is often the case in wishes, are presumed to live happily ever after. This is of course not what happened to her or her people. But the Disney version gave us cross-cultural accommodation, mutual understanding, and even interracial union. That’s why it resonated so powerfully in the culture at that time.

I should note that although I found the term several years ago, I have since discovered, via Google, that it was used once in a Sears Christmas commercial that aired on television in 2004. However , I believe I am the first to posit this in a historical context.

When I took up my post at Autry, I decided to focus the book on the first century of the American Republic. I chose these places because they presented examples of how peace and sometimes even friendships prevailed – for a time – instead of the usual violence and subjugation that occurred during the colonization of the American frontier. There are many other places and times one could name but I chose these because I could thread from one to another and could build on my own prior research to create this thread.

Q. Why favor moments of peace and friendship?

For most of the 20e century, the dominant narrative of the American West was one of triumphant conquest, of brave settlers driving out inferior native peoples. This expansion fulfilled our “manifest destiny”. In this story, that’s what the great American is.

In recent decades, this narrative has been reversed as writers and educators have come to expose the violence that was at the heart of Western colonization. The new narrative emphasizes colonialism, settler violence and exploitation, sometimes even the genocide of indigenous peoples. Recent histories detail the cost of colonial expansion on both dispossessed populations and despoiled environments. As a result, many historical events that the public once perceived as “feeling good” stories have been replaced with “guilt” stories. But whether celebrated or lamented, violence has retained its centrality in Western histories ancient and recent.

The title of my book is meant to be provocative. It certainly runs counter to long-held and current conceptions of how the West became American. Contrary to the mainstream narrative, the contents of the book show that there were times and places where varying degrees of peace and even friendship prevailed between settlers and natives.

The episodes suggest that it is possible for two competing, sometimes warring, groups to come to a peaceful accommodation. I wanted to explain how individuals and people have overcome their differences instead of being overcome by them. And to see what we could learn from these places.

Q. Dodge, Kansas is a place that many people have heard of. What happened there?

Of all the places I write about Dodge, it seems like it’s least likely to qualify for a book called peace and friendship. Dodge City is the site we most associate with the “Wild West”. Even 150 years after its heyday as a ranching town, it remains a metaphor for unchecked violence and endemic disorder.

Now, this story is not completely false. When the future city was just a frontier outpost and buffalo hunting center, there was a lot of violence. But soon after cattle replaced bison as the city’s economic raison d’être, city leaders decided to restrict the carrying of guns. Despite uneven enforcement, the new laws have significantly reduced homicides. And to my knowledge, no unarmed cowboy has claimed the right to continue to bear arms on the basis of the Second Amendment.

With the popularity of “Westerns” in movies and television, some colorful characters such as Bat Masterson and Wyatt Earp rose to prominence, and Dodge City was once again associated with gunfights and violence. Today, as the town seeks to attract tourists, business leaders play on the association with Wyatt Earp and the Wild West and still stage shootouts at the Boot Hill Museum.

Stephen Aron, CEO of the Autry Museum, shows one of the items that features the museum’s latest exhibition, “Dress Codes“.

Q. How has your work at the Musée d’Autry influenced you? And what are your goals now that you are CEO?

During my early years at Autry, when I split my time with UCLA, it opened my eyes to broader possibilities, to how, through the museum, I could make history more accessible. and more meaningful. I also saw that it was possible to make history more public and more present.

Today, as CEO of the museum, I want to continue its mission to make the history of the West more accessible and to emphasize that this region is a place of convergence. This is where various cultures mixed and mingled and influenced each other.

The history of the West was once based on the triumphant tale of conquest by white settlers. We now understand that this relied on the exclusion and suppression of many other viewpoints. We must actively seek out and make visible stories that have been erased, silenced or ignored.

When we bring together the stories of all the peoples involved in the West and start conversations with each other, we learn that the past is not distant but linked to the here and now. Then we can come together to consider our common future.