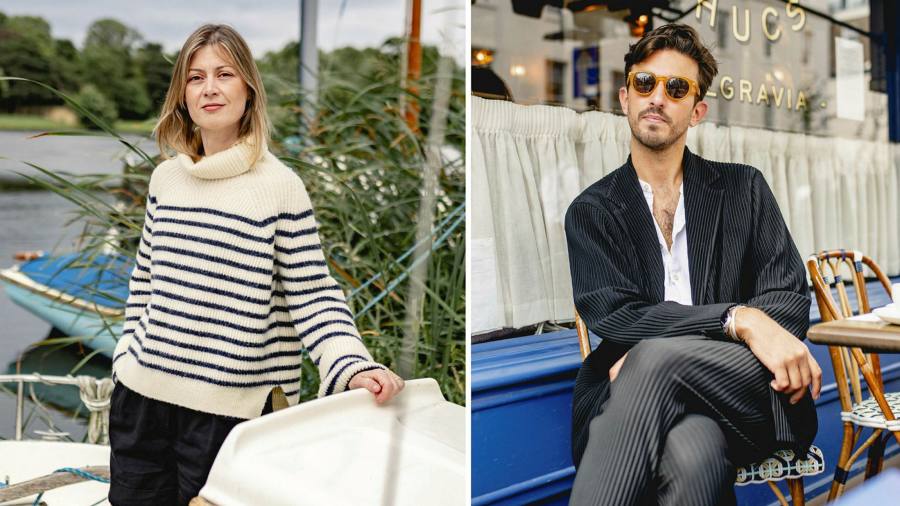 Stay in style: how two editors plan their vacation in the UK

Thanks to intensive summer years in Ireland, I know the key is to pack for the time you have, not the time you want.

My parents now live in Donegal on the northwest coast of Ireland, on a road known as the Wild Atlantic Way. It’s a poetic shortcut for all types of weather every 15 minutes: cartoonish oblique rains, racing clouds, gusts of wind and, more often than you might think, blue skies and sunshine. However, it rarely exceeds 27 Â° C, so I know that wearing see-through and floaty dresses is a waste of time and space.

I’m not an overpacker, but neither am I a minimalist. The thought of being caught in the wrong clothes makes me anxious. In my opinion, the most stylish person at an outdoor event isn’t the person with the coolest outfit but the one who stays warm and dry during a sudden downpour.

So, the worst case first: rain gear. Scandinavians do the best – Norwegian Rain’s Raincho (Â£ 686, norwegianrain.com) is lined with cashmere. I also have one of the Tretorn Wings Unisex Jackets (PVC-free thigh-high polyurethane; Â£ 80; outsidersstore.com). Shiny in the rain it can sweat so don’t wear it uphill.

On the other side of the weather spectrum: the sun. I like to be equipped to grab any tanning opportunity. At the slightest suggestion of a ray of Donegal sunshine, I put on some denim shorts. The Board Fold shorts by Raey, the in-house brand of Matchesfashion.com, are a decent lengthier length (Â£ 125, matchesfashion.com).

If you’re not the shorts type, pack white or off-white jeans as they’ll go with anything, although beige chinos or cargo pants are easier to clean. I have a two year old pair by Acne Studios, but Rag & Bone has a similar style called Angela Field (Â£ 290; net-a-porter.com). Wear with an oversized denim, cotton or linen shirt – always useful to have an extra layer over a tank top. This summer, I keep turning to a navy linen pajama shirt from Rossell (on sale for Â£ 99, rossellengland.com), which has a good square shape and softens with each wash.

You’re going to want a knit to throw everything away. I favor British labels like & Daughter and Navy Gray and I recently discovered Charl Knitwear, a label founded by a former Burberry knitwear designer and inspired by Norfolk fishermen. Nautical Stripe Chibbles (Â£ 225, knittingcharl.co.uk) is my bag and goes with shorts, jeans and chinos.

I would happily wear the shirt and chinos for dinner at a local restaurant, but I could also don a light linen or cotton dress. I dream of Kindred of Ireland’s romantic Mulberry dress (Â£ 280, kindredofireland.com), which uses locally sourced flax. They’re made to order, so expect to wait up to four weeks. Can’t you wait? British label NRBY’s Elizabeth linen dress has a similar feel (Â£ 125, nrbyclothing.com)

Shoe? Sandals, of course. Joseph’s Fussbett ankle strap sandal in black has been my shoe of the summer so far, but I’m clearly not the only one as it’s now pretty much sold out in black. The brown colourway is still available (on sale at Â£ 201, joseph-fashion.com) or try Jigsaw’s Ivy Leather Sole Slider (Â£ 99, puzzle-en-ligne.com). I also love the comfort soled sandals from Ancient Greek Sandals, which are perfect for a day’s hiking (from Â£ 100, sandales-grec-antique.com.) Travel in sneakers to save space. I like Veja’s V-10 in white (Â£ 115, matchesfashion.com).

I always come back to white because I love white, but also because my number one rule is not to wrap the rainbow. While it may be tempting to think that summer is all about color – and there’s this big British holiday trend to go for bright yellow fisherman’s jackets and playful patterned rubber boots – I don’t care. want a limited palette. This means that whatever you take with you will work together, so when the woodstove won’t fire, you can wear all of your clothes at the same time and still look like a classy person – obviously the number one consideration. to take with you during your stay.

â€œDo they call you ‘Two suitcases Teo ?!’â€ my sister shouted across the table during dinner in Soho. The year was 2017, I had gone to men’s fashion shows, was exhausted and regaled her with horror stories related to the luggage of my month-long trip.

The worst of these tales resulted in me pushing two 26 kg suitcases about 2 miles from my hotel in Florence to the train station in the heat of 39 Â° C because I couldn’t take a taxi. Not only did I discover on my sweaty arrival that my train to Milan – the last of the day – had been canceled, but my hotel was out of space. “I’ll never pack so much bullshit again,” I muttered.

For years on my trips to Europe for Fashion Weeks, I tried to pack just about everything in my wardrobe on every trip. The seasonal show ride was such a critical run that I felt confident knowing that if I wanted to wear a hot pink Marni pullover with Armani silk shorts and a pair of fur Birkenstocks, then, well, I could. .

However, after my 2017 overwrapping debacle, I realized that something had to give way and forced myself to embrace a new way of packaging that was lighter and brighter. I’m a metropolitan being at heart, so my travels this summer will likely be in cities across this country rather than a windswept beach. Think long breakfasts at Bath’s famous Olive Tree restaurant and long glasses of single malt whiskey at the cozy-cum-chi-chi bars of Edinburgh’s Royal Mile.

My current approach is one I learned from a former colleague, a seasoned traveler who, for any trip, no matter how long, always carried the same list of parts: three white shirts, three pairs of blue drawstring dress pants, a blue crew necked sweater, a blue blazer, a pair of white sneakers, a pair of brown laces, underwear as needed and a coat if he went to a cold place.

And although I haven’t mastered the art of minimal packaging with quite the same measured enthusiasm, I have made great leaps and limits since my Florentine accident. I now limit myself to one tote or small suitcase per trip – whether at home or abroad – and I only pack a maximum of three versions of each item: no more than three T-shirts. (Maison Margiela makes a smart pack of three t-shirts in shades of ivory, bone and white, Â£ 265, farfetch.com) and, say, no more than three shirts (you can’t go wrong with a trio of Uniqlo slim Oxford shirts, Â£ 24.95, uniqlo.com) and no more than three shoes – a pair of Tod’s driving shoes (Â£ 360, tods.com), Grenson white sneakers (Â£ 210, matchesfashion.com) and a pair of Clark’s desert boots (Â£ 115, clarks.co.uk).

If I’m away more than three days, I’ll take more than three pairs of underwear, for obvious reasons, and for a coat, a bonded cotton trench coat from Mackintosh (Â£ 995, mrporter.com) can be layered according to the temperature and will always be impeccably elegant.

I also learned that Issey Miyake’s Pleated Menswear is a minimal packager’s dream. Impossible to crumple, machine washable, ridiculously light, a suit from the brand is as comfortable for falling asleep on a sleeper train to Scotland as it is chic enough for attending a meeting.

My final tip for light packing is to roll your clothes rather than fold them. Riding not only minimizes the air wasted in your suitcase but also, by a miracle of physics (there’s a reason I work in fashion), it also keeps clothes from wrinkling as much as they do when. ‘they are bent.

Oh, and never travel to Florence at the end of June it’s like swimming in lava, even if you manage to pack a little. Bath is much easier to work with.

Pinziko Swimsuit Cover Up is 31% Off on Amazon