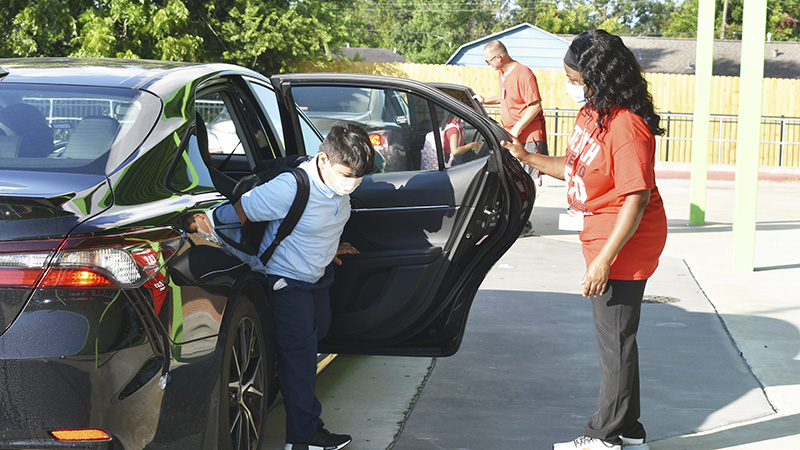 Students in Port Arthur and Mid County will return to school on Wednesday, some wearing masks while others will not.

In addition, as there is no more virtual learning, all students return to face-to-face lessons, as was the case in the first semester.

The Port Arthur Independent School District sent a Facebook reminder to parents, guardians and students that masks are required.

“Well-fitting masks that cover the nose and mouth are still a requirement of dress codes on all campuses, especially now,” the memo said.

Adrinne Lott, media and communications specialist for the district, said masks were added to the dress code in late August.
Masks are mandatory on campus and on buses.

And although the district may provide masks, authorities prefer parents to be the providers, she said.

It is also recommended to be vaccinated against COVID.

Lott said the district continues to sanitize and sanitize as it has been.

It’s the same as it was the whole school year.

“Face coverings will not be required for staff, students or visitors, but are encouraged,” she said.

The operational procedures, from Tuesday, remain the same as from August. Schools have hand sanitizer in classrooms, cafeteria, and campus common areas, visitors will be allowed on campus according to standard visiting rules, and guard crews maintain a regular cleaning schedule to sanitize areas with high traffic and commonly used throughout the teaching day, according to information from the municipality.

For the Port Neches-Groves Independent School District, face coverings are optional for students, staff and visitors to campus.

“The protocol is the same as at the start of the school year,” specifies Julie Gauthier, assistant superintendent. “If a student is sick or has symptoms, they should stay home. “

The Centers for Disease Control and Prevention recently shortened the quarantine period from 10 days to five days, as long as the person is no longer showing symptoms.

The district is continuing all cleaning and disinfection procedures that began with the 2020-21 school year.

On Tuesday, the Port Arthur health department reported 110 positive cases of COVID for central and southern counties from December 30 to January 3.

Most cases are believed to derive from the omicron variant, the first confirmed cases of which were verified in Jefferson County last week.

The latest strain of COVID was first detected in South Africa in November, according to the CDC. It was then reported on December 1 in California as the first American case. Less than a week later, Texas saw its first case in Harris County.

“The large projected increases in the number of cases indicate increases in hospital demand even though the severity is reduced, due to the large number of anticipated cases occurring within a short period of time,” the CDC said.

The variant spreads more easily than delta, but it is not certain that the strain produces serious disease. While vaccines are expected to reduce the severity of cases and the number of hospitalizations, breakthrough cases are expected.

– Monique Batson contributed to this story.

The Trendy Bride’s Guide to Camouflage Wedding Dresses: Get Creative