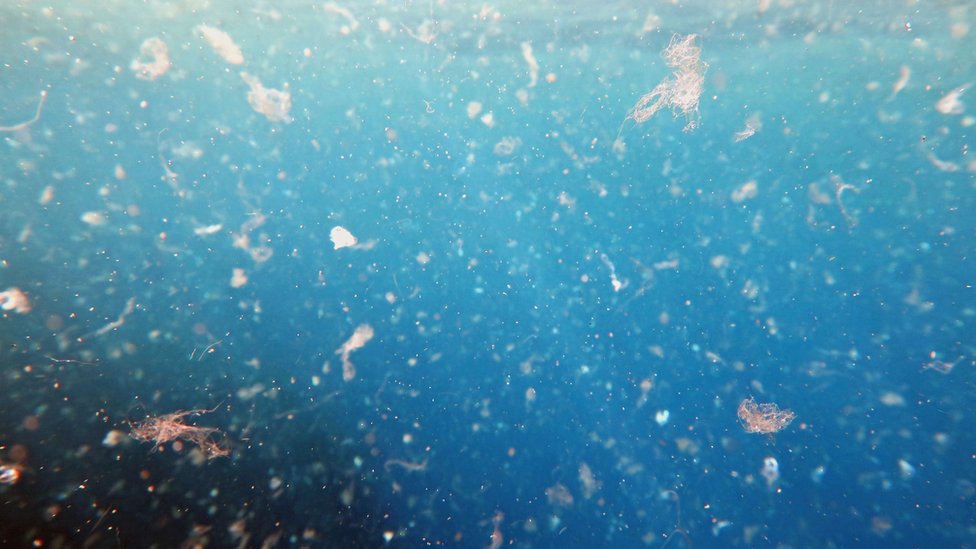 Plastic: How paint could be a “forgotten” threat to marine life

Paint could be one of the most common types of microplastics in the ocean – but scientists have warned that the threat it poses to marine life has been “overlooked.”

Researchers carried out surveys across the North Atlantic and estimated that each cubic meter of seawater contained an average of 0.01 flakes of paint.

These can come from ships and oil rigs coated with paint to protect them from corrosion, but they can flake off in the sea and harm marine life.

Learn more about the problem

In their study, the scientists found that after microplastic fibers, paint was the second most commonly found substance.

How much paint is there in the ocean?

They found an estimated concentration of around 0.16 particles in a cubic meter, which means that these fragments are likely to harm a large number of marine animals in delicate ecosystems.

The paint flakes appeared more densely distributed around the seas of the continental shelf of northwestern Europe than in the open oceans.

That’s according to a new study by scientists at the University of Plymouth and the Marine Biological Association.

Chemical analysis of part of the paint revealed high amounts of copper, lead and iron.

This could pose an additional threat to the ocean and many species that live there and ingest the particles.

Is there a way to reduce the amount of paint entering the ocean?

By studying the chemical composition of the paint, scientists were able to determine which areas of the ships it came from.

However, in coastal areas paint can also come from buildings, waste and industrial sites.

Lead author Andrew Turner, associate professor of environmental science at the University of Plymouth, said: “Paint particles have often been a neglected component of marine microplastics, but this study shows that they are relatively abundant. in the ocean.

“The presence of toxic metals like lead and copper poses additional risks to wildlife.”

They recommended using non-toxic paints that are more environmentally friendly and limiting inputs into the oceans.

How much of a problem are microplastics?

In 2015, a study estimated that there were between 15 and 51 trillion microplastic particles in the sea, but that number is now likely much higher.

At least 8 million tonnes of plastic end up in our oceans each year, according to the IUCN.

Most of the microplastics found on the seabed originally come from our clothing, which can be made from synthetic materials such as polyester.

Thousands of plastic particles break off from these clothes in the washing machine, but are not picked up by standard filters.

This waste then pollutes the oceans and can be harmful to sea creatures.

Meanwhile, large pieces of plastic cause problems for marine life if mistaken for food.