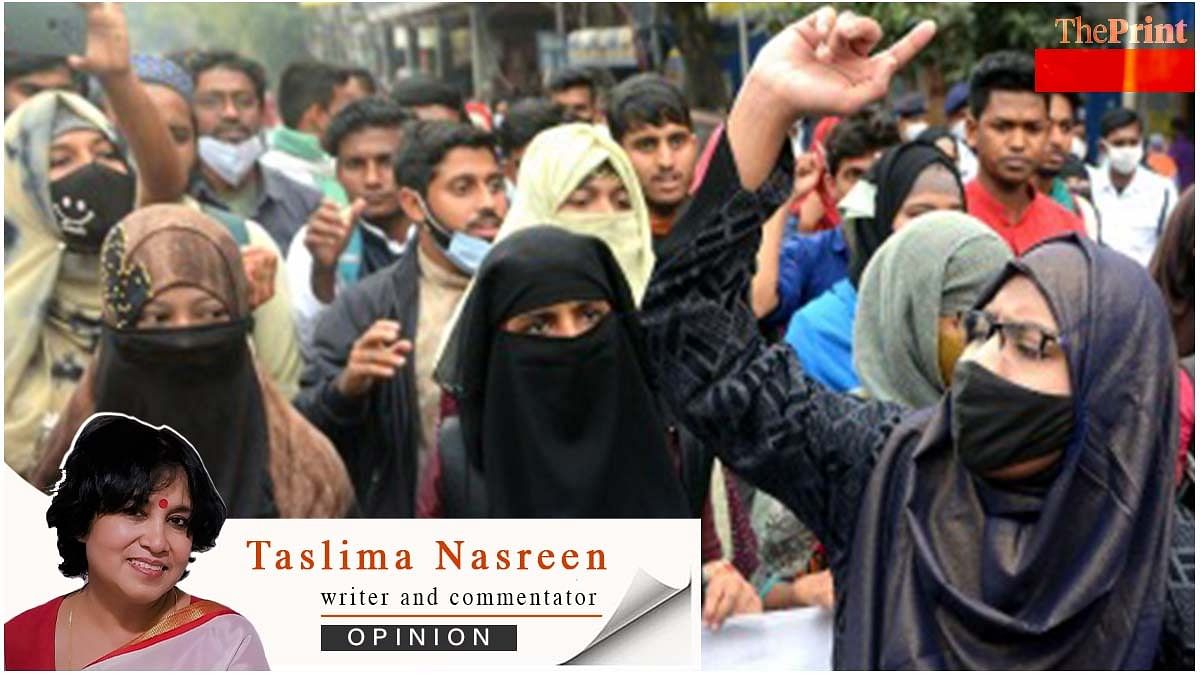 Muslim women must see that the burqa is like the chastity belt of the dark ages, writes Taslima Nasreen

Jthere is virtually no difference between a Jewish, Christian, Muslim or Hindu fundamentalist. They are all essentially “intolerant”. Standing next to the mortal remains of playback singer Lata Mangeshkar, Muslims prayed to Allah, Hindus Bhagwan and Christians to their Almighty God. Seeing Bollywood icon Shah Rukh Khan raise his hands in prayer and blow on his body, some Hindu extremists thought he was spitting. Then the social media chaos descended.

I have noticed that in India, while Muslims are largely aware of Hindu rituals and practices, most Hindus ignore those of Muslims. Similarly in Bangladesh, Hindus understand Muslim rituals better than what Muslims know about Hindus.

To a large extent, intolerance stems from ignorance. As we saw in the Shah Rukh Khan incident, people of all religions stood behind him. In fact, there are enough liberal and rational people in the Hindu community to oppose the extremists.

Read also : The real problem in Karnataka’s hijab row is how ill-defined secularism is – Nehru to Modi

The dispute over the hijab

An unnecessary controversy over the hijab has erupted in another part of the country, Karnataka. After authorities objected to female students wearing the hijab in colleges, the protest by Muslim female students began. Then, a group of students wearing saffron headscarves took to the streets to protest against the burqa. Chief Minister Basavaraj Bommai ordered schools and colleges to remain closed for a few days. But that’s not a solution. If the state fears riots, violence may erupt when schools and colleges reopen. To prevent riots, mentalities must change, and mutual hatred and fear must be washed away. In this regard, the Interim Order of the Karnataka High Court makes sense. I believe that a uniform civil code and a uniform dress code are necessary to stop disputes. The right to religion is not above the right to education.

The distance between Hindus and Muslims has not been bridged even after 75 years of partition. Pakistan separated from India and became a religious state. But India never wanted to become a Pakistan. Or it could have easily turned into a Hindu state 75 years ago. The Indian Constitution defends secularism, not religion. This country, with a Hindu majority, is home to the second largest Muslim population in the world. The laws of India give equal rights to people of all religions, castes, languages, creeds and cultures.

It is perfectly normal for an educational institution in a secular country to impose secular dress codes on its students. There is nothing wrong with such a message from the school/college authority that states that religion should be practiced within the confines of the home. Educational institutions, intended to promote knowledge, are not influenced by religion or gender. It is education that can lift people from the abyss of bigotry, meanness, conservatism and superstitions to a world where the principles of individual freedom, free-thinking, humanism and rationality based on science are highly valued.

In this world, women do not feel proud of their chains of subjugation but rather free themselves from them, they do not perceive covering themselves with a burqa as a matter of right but as a symbol of the persecution of women and the reject. Burqas, niqabs, hijabs have the sole purpose of commodifying women as sex objects. The fact that women should hide from men who sexually salivate in plain sight of women is not an honorable thought for women and men.

Read also : In Karnataka, it’s not about Hijab, it’s bigotry and apartheid

Twelve years ago, a local newspaper in Karnataka published one of my articles on the burqa. Some Muslim fundamentalists vandalized the office and set it on fire. They also set fire to nearby shops and businesses. Hindus also took to the streets in protest. Two people died when police opened fire. A simple burqa can still cause a fire in this state. Riots can still break out over the burqas.

A burqa and hijab can never be a woman’s choice. They should be worn only when choices are removed. Like political Islam, the burqa/hijab is also political today. Family members force the woman to wear the burqa/hijab. It is the result of sustained brainwashing from a tender age. Religious clothing like the burqa/hijab can never be a person’s identity, which is created by their abilities and achievements. Iran has made the hijab compulsory for women. Women took to the streets and threw off their hijabs in protest. Karnataka women, who still consider hijab as their identity, need to strive harder to find a more meaningful and respectable identity for themselves.

When a woman’s right to education is violated because she wears the hijab, when someone forces a woman not to wear the hijab as a prerequisite for education, I am in favor of education even in the hijab. At the same time, when a woman is forced to wear a hijab, I am in favor of throwing the hijab away. Personally, I am against the hijab and the burqa. I believe it’s a patriarchal conspiracy that forces women to wear the burqa. These clothes are symbols of oppression and insult to women. I hope women will soon realize that the burqa is no different from the dark ages chastity belt that was used to lock down women’s sexual organs. If chastity belts are humiliating, why not the burqa?

Some say the burqa rage in Karnataka is not spontaneous and is backed by political forces. It sounds very colloquial to say that riots don’t happen, but are manufactured – mostly before elections and almost always between Hindus and Muslims. Apparently they count for a few votes. I too was expelled from West Bengal for a few votes.

It is comforting that the riots are not happening. It would be scary if they happened spontaneously. We would then have assumed that Hindus and Muslims are born enemies and can never live together in peace.

I believe that even the partition riots did not happen by themselves, but took place.

Read also : The right answer to the wrong hijab question is always a wrong answer

Some Hindu fanatics have called for turning India into a Hindu Rashtra, where all non-Hindus will either be killed, converted to Hinduism or forced to leave the country.

I really don’t know if there are many of these people. I know India as a secular state and I like it that way. I trust the country. Is India changing? Will this change? I am aware of the liberality of Hinduism as a religion. Everyone is free to follow him or not to follow him. Unlike Islam, Hinduism does not compel you to follow its practices. Hinduism does not prescribe people to torture, imprison, behead, hack or hang someone to death for blasphemy. Superstitions still exist in Hinduism, although many things have faded over time. But, India will be a country only for Hindus, anyone who criticizes Hindus or Hindutva will be killed – these are statements that are new to me.

For more than three decades, I have critically examined all religions and religious fundamentalism in order to defend women’s rights and equality. My writings on Hinduism and religious superstitions suppressing women’s rights have been published in Indian newspapers/magazines and also appreciated. But today, whenever I ask a question like, “Why don’t men observe Karva Chauth for the welfare of women?” hundreds of Hindus are personally attacking me and insulting me, demanding my expulsion from the country. It’s a new India. An India that I cannot imagine. I find their behavior similar to that of Muslim fundamentalists. Completely intolerant.

If India was a Hindu Rashtra, could all fundamentalist and liberal Hindus live in peace? Will there be no discontent among the dominant and oppressed castes, no discrimination between men and women? A state reserved for Hindus? May be. The same way the Jews have carved out a state for themselves and the Muslims have Pakistan.

I will also have to leave a Hindu Rashtra because I cannot become a Hindu. I am an atheist and a humanist, and I choose to remain so. Gauri Lankesh, I believe, was a humanist. She wasn’t worthy of a Hindu state, and neither will I be.

The author is a writer and commentator. She tweets @taslimanasreen. Views are personal.

The race of the Indian designer to globalization

nifty50: Dalal Street Week Ahead: Market will see broad consolidation, but with a neutral to bullish undertone