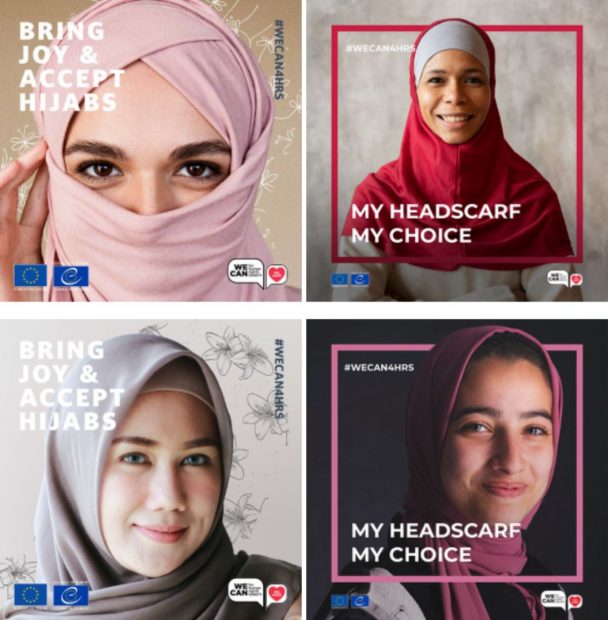 EU funds campaign celebrating the wearing of the Islamic headscarf: “Bring joy and wear the hijab”

A campaign of Council of Europe, co-funded by the European Union (EU), celebrates freedom with the Hello“(veil in Arabic) with posters praising â€œthe beauty of diversityâ€ accompanied by images of young Muslim women wearing the Islamic headscarf. The campaign sparked rejection from netizens who remember that while Europe promotes Islamization, in countries like Iran, women are defying the ayatollahs by taking away their Hello in public at the risk of his life.

In English and French, the Council of Europe advertising campaign was launched with phrases such as “Beauty is in diversity as freedom is in the hijab” [â€˜La belleza estÃ¡ en la diversidad, como la libertad en el hiyabâ€™].

Several Internet users, including the Vox MEP, Hermann Tertsch, showed their amazement at the “fascination” generated by the Islamization of Europe with messages like this campaign which say: “Bring joy and use Hello“. Some of these posters have been removed from Twitter due to criticism received.

The controversial EU-backed campaign to normalize the Islamic veil in Europe.
â€œBring joy and accept hijabs,â€ one of his messages says. The campaign materials were deleted from Twitter after criticism received. You can see them here: https://t.co/ryI7aJnGx0

Is the problem for Europe Hungary and Poland or the European institutions that sell the hijab as diversity and beauty, that is, the submission of women to men? pic.twitter.com/ILfFexIjhq

European supranational organizations and media fascinated by the Islamization of Europe. Will they also like Sharia law? pic.twitter.com/MGfwCI45wQ

EU proclaims how beautiful the hijab is and say you appreciate it. When the problem is in European neighborhoods, it already becomes almost as obligatory as in the bankrupt companies where it comes from. Whoever saw Turkey 30 years ago and sees it now knows what I’m talking about. pic.twitter.com/U8bgX5VL22

Ban on wearing the hijab?

The curious thing is that this campaign contradicts the ban on wearing the Hello which according to European law does not constitute any discrimination. This was determined by the European Court of Justice in two cases presented in Germany. A charity caregiver and supermarket cashier began wearing the garment after years of work and were suspended after being warned.

“Articles 1 and 2, paragraph 2, letter A, of Council Directive 2078 must be interpreted as meaning that an internal company regulation which prohibits workers from wearing a visible sign of their political, philosophical or religious practices in the workplace does not constitute direct discrimination based on religion or belief within the meaning of that Directive against workers who consider certain dress codes for religious reasons, provided that said rule is applied generally and indistinct â€, condemned the President of the Court, Koen Lenaerts.

In the case of the two workers, the final say goes to the German courts, to determine whether or not there has been discrimination. The European Court had already concluded in 2017 that companies could ban Islamic clothing and other religious clothing under certain conditions. Five million Muslims live in Germany, the country’s largest religious minority.

Disclaimer: This article is generated from the feed and is not edited by our team.