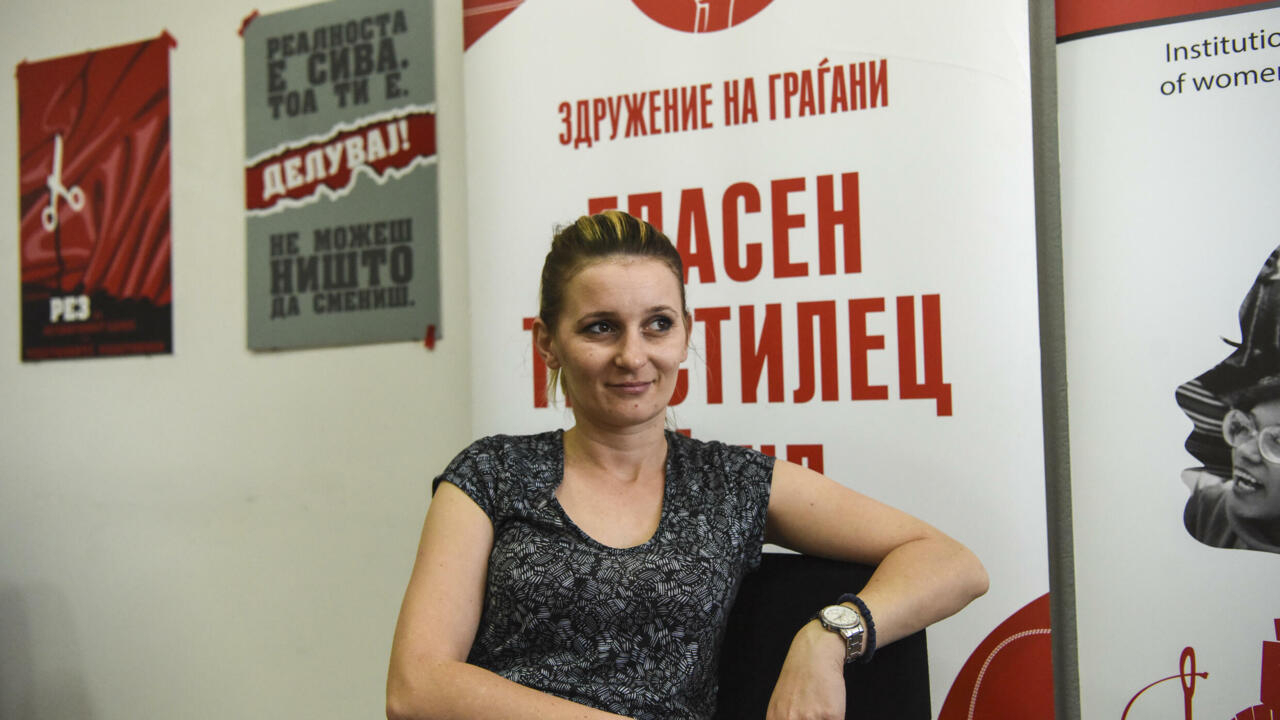 “Deprived of the right to vote”: Macedonian women step up their fight for equality

A sewing machine and a raised fist, a female superheroine ready to strike back against bad bosses: posters in the office of former textile worker Kristina Ampeva highlight her fight to protect women at work.

She traded her sewing machine for a megaphone in 2016 after years of working in “horrendous” conditions at factories making clothing and leather goods primarily for Western European markets.

“I joined this fight with all my heart and all my soul to help these disenfranchised workers,” she told the office of her NGO, Loud Textile Worker, in the eastern town of Shtip, a region dominated by the garment industry.

The NGO helps individual workers – most often women, who make up 80 percent of the workforce in garment factories – and pushes for broader reform, with success, including helping to bring wages up minimum in the industry.

But North Macedonia is still a long way from substantive equality.

Data from the Paris-based Organization for Economic Co-operation and Development (OECD) shows 54 percent of women were employed last year, barely an improvement from 2010 and well below the country average OECD 64 percent.

There has been “no significant improvement” in wages in recent years, according to researcher Neda Petkovska of the NGO Reactor.

And marginal progress in putting women to work will likely be all but wiped out by the coronavirus pandemic, she says.

The fight for gender equality is particularly pronounced in Shtip, an hour’s drive from the capital Skopje, which was a stronghold of the garment industry in Yugoslav times and remains today.

Dozens of dingy, low-lying factories on the outskirts of town make shirts, shoes, leather goods, dresses, and whatever the market might demand.

During the morning and evening rush hours, buses run between the center and the industrial areas.

Almost all of the factory workers are women.

â€œIf you don’t have political connections, the garment industry is the only job open to you at Shtip,â€ Ampeva says.

Women are the backbone of an industry which accounts for around 13% of North Macedonia’s economic output and more than a quarter of its exports, but most receive the minimum wage of around 250 euros ($ 295 ) per month, barely enough to survive.

Many women are the sole breadwinner in the formal economy, which means that thousands of households depend on these jobs for social security and other benefits.

So when things go wrong, the cost can be catastrophic.

She has been defended by the NGO d’Ampeva since she refused to sign a 30-day CDD with her company – she had worked for them for six years on a CDI.

â€œThey told us, ‘You should sign, it’s a safe job.’ There is no secure job with a one-month contract, â€says the 32-year-old, who is currently on forced unpaid leave.

– Battle of the minimum wage –

Ampeva says her NGO has filed more than 1,000 complaints in five years and has helped thousands of workers.

She is also proud of the NGO’s role in overhauling the minimum wage law, which had conditioned the wages of textile workers on reaching a production quota.

The Constitutional Court ultimately ruled the clause discriminatory and overturned it.

Angel Dimitrov, a director of the garment industry who heads the country’s employers’ organization, insists the bad old days are over.

“Most factories in Macedonia respect labor rights and working conditions,” he says, with a better record than competing countries like Bangladesh, Vietnam or Pakistan.

But he still complains about the â€œdemotivatingâ€ minimum wage.

â€œForty percent of my workers don’t meet their quotas to earn minimum wage, so the company actually has to compensate them,â€ he says.

While Ampeva challenges logic, she accepts that many of the sewing machine abuse she has suffered – like forcing women to work in sweltering heat without air conditioning – are now much rarer.

She says the key to further improving the working lives of women lies in Western European clothing brands.

“They must finally understand their own responsibility,” she said, adding that she tried to contact all the brands whose suppliers are involved but received no response.