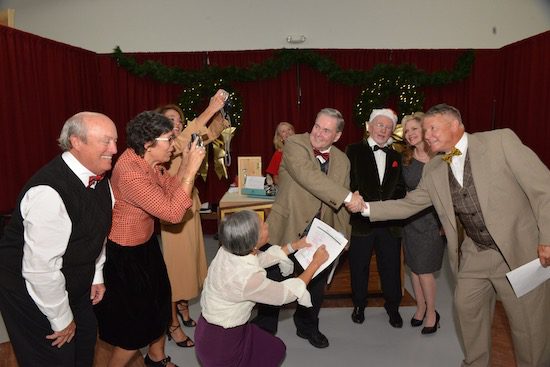 It was a night before Christmasâ€¦ 10 nights to be exactâ€¦ the Royal Palm Players performed Miracle on 34th Street, the fifth of 10 performances of Christmas Hope and Joy, in one of their three dinner theaters. , the Coral Creek Club. Three previous performances have taken place at the Lemon Bay Golf Club. Three final performances will take place on January 4, 6 and 7 at the Boca Bay Pass Club.

RPP’s performances of Miracle on 34th Street were acclaimed by all who saw them, as was Inherit the Wind, RPP’s first production of season 21-22. As announced, it will clearly be a season of superlatives. Director Kate Ingram and Music Director Jason Tucker have definitely put their creative mark on this offering. These successful productions bode well for future productions of “Proof”, “I Hate Shakespeare” and “The Fantasticks”. If you have not yet purchased your tickets for these performances, now is a good time to ensure your presence. Word has passed and ticket purchases are soaring!

All productions are based on talented and committed producers. Co-producers Ann Fletcher, past RPP president, and Kathy Kelleher, recently retired RPP office manager, make this production possible. The producers remain involved until the reception of the performances and the registration of the participants. Indeed, the ravishing, beautifully dressed woman in a formal black dress sitting at the right end of the row of actors seated on the stage is Ann Fletcher, helping with costume changes on stage.

Two things immediately strike spectators. First the substance and the quality of the whole, another very professional creation by Laura Brock. The piece, arranged for music, was originally a radio piece, and the set captures the elements of a radio studio. The other striking thing is the authenticity and creativity of the costumes and accessories created by the very talented costume designer Arnie Preston. RPP’s luck in the collaboration of these two, Laura Brock and Arnie Preston, is exceptional in community theater.

The whole is all the more remarkable as it must create a presence in somewhat restricted spaces and must be easily assembled and disassembled for transport and installation in three places. This repositioning is achieved through the efforts and ingenuity of Production Manager Mark Masselink, Board Member Bill Whitney and Jeppe Bennetsen of SunTech Builders, LLC, a company long committed to supporting RPP.

The radio show from which the play was adapted took place in 1947. For lovers of period fashion, Arnie Preston creates costumes that exquisitely reflect the clothing of this post-war era. And director Kate Ingram’s “Introductory Notes” in the game program are a rich read of the evolutionary story from Saint Nicholas to Santa Claus and radio programming as the predecessor of television and movies.

Hats off to Arnie Preston, both metaphorically and literally. There’s the pill box hat worn by Maggie Bush that matches her camel-colored period costume consisting of a lapel jacket and a conservative-length flared skirt moving in loose pleats. Charmaine Reynolds, RPP’s new office manager, in this first appearance in an RPP production, showcases a domed hat with a black and white plaid cape also of conservative length. Members of the choir at different points wear domed hats, newsboy hats, parade hats and postal hats.

Show sweetheart, 12-year-old Makaila Lindsey, looked no more alluring than in her black and white plaid dress with an oversized black velvet collar trimmed in white rickrack with black velvet buttons and cuffs and a bright red belt. And that’s just one of her two pretty dresses. Joan Kale, as Mr. Macy’s assistant, enjoys a number of eye-catching costume changes, almost always including a triple row of pearls and a brooch. The leading man, James Martin, couldn’t look better for the role, in his dark pinstripe suit, with sleek, puffed hair. John Thomas, true to his dapper role, needed nothing more than his own green-black velvet tuxedo jacket and black dress pants, which he accented with a red pocket square. and red socks.

Apart from a report in the vein of a social reporter of the time, a review of some of the highlights of the play is in order. The casting of the roles brings viewers a number of all the wonderful RPP actors. Maggie Bush, Kris Doubles, Jim Grant, Rich Mutkoski and Charmaine Reynolds each play three roles. Priscilla Masselink and Julia Pierce play two roles. And of course there is a choir of transvestite men wearing fascinators and furry shrugs.

Priscilla Masselink, in the role of the radio presenter, embodies a professional character of director. The exception being a particularly comical piece in which she emphasizes the existence of an emergency in the studio, like a flight attendant. Maggie Bush’s broad acting abilities, deftly transitioning from a wildly enthusiastic elf to a calm, knowledgeable medic with just a glance at a tasseled cap. Jim Grant provides a rendition of a very frustrated psychologist who emits a striking vocal whimper after being hit in the head in slow motion by John Thomas (Kris Kringle) walking stick, reputed to be a sled rail.

Macy and Gimbel characters Kris Doubles and Rich Mutkoski give their competitive jokes a searing, throaty voice. Joan Kale, through her considerable acting lineup, carefully portrays Macy’s agent Doris Walker’s shifting stances on Kris Kringle’s retention as Macy Christmas Santa and her attraction to her suiter attorney played by James Martin. Martin is unequivocal in his attraction to Kale’s character, Doris Walker. Thanks to her, he embarks on a nice solo, demonstrating his equally unequivocal crooning talent. Its swaying on the melody, stepping out and extending its arms and hands with the lyrics, is reminiscent of the great popular crooners of the time.

John Thomas has a few outlines, a very memorable one being his attempt to fail a psychological test by naming the first president as Captain America. And Julia Pierce gives us another application of her considerable vocal talent, this time a taste of jazz, to include an incredible facsimile of a jazz instrument and a quick, light scat.

There is a saying among the actors, never play with an animal or a child. They steal the show. And indeed, the young Makaila Lindsey who plays the character of Joan Kale, the daughter of Doris Walker, is the complete proof of it. His acting is enchanting authenticity and his considerable number of lines fully memorized and perfectly delivered. Makaila is undeniably a star of the series.

And no review of the play would be complete without a mention of the careful staging provided by Oakton Reynolds, son of Charmaine Reynolds, both representatives of the talented Reynolds theater family. This is Oakton’s debut with the RPP. The play was also expertly directed by Sarah McDonald. This is the second time that Sarah has participated in the directing of RPP and participated in productions of RPP.

The RPP welcomes participation in its many areas of activity. If you are interested in an area, please contact RPP to help you further your interest.

The three remaining performances of “Miracle on 34th Street” scheduled for January 4, 6 and 7 at the Boca Bay Pass Club are sold out. However, if you want to extend the joy of Christmas a bit more, you can get on the waiting list. Contact the Royal Palm Players box office for tickets at 964-2670. And to all of you a happy new year!

Anushka Sharma, Priyanka Chopra and Alia Bhatt band in “semi-corporate” atmospheres in a shirt dress style, get your dose of inspiration

Harry Styles outfits: his most stellar fashion moments from 2021